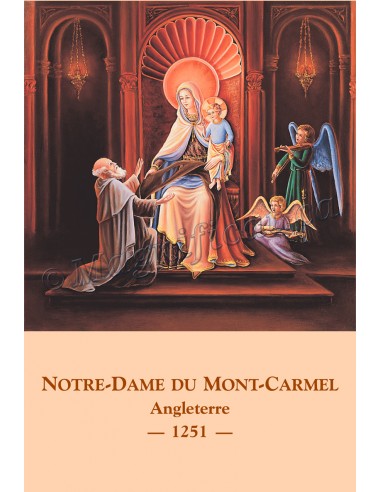 Our Lady of Mount Carmel

Text on the back of the picture:

OUR LADY OF MOUNT CARMEL

Of all the apparitions of the Blessed Virgin Mary to the earth, Our Lady of Mount Carmel is one of the most ancient and best known in the Church. It occurred in 1251. The Mother of God appeared to Saint Simon Stock, the Superior General of the Order of Carmel, in the early morning of July 16. She held Her adorable Son in one arm. With the other hand, She presented the holy monk with the scapular of the Order, promising him that all who wore that habit would be preserved from the eternal fires of hell. She reappeared in 1316 to Jacques d’Euze, the future Pope John XXII, adding that those who wore the scapular would be granted the grace of deliverance from purgatory on the first Saturday after their death. What great goodness and mercy on the part of the Blessed Mother!

No reviews
Tap to zoom

Save products on your wishlist to buy them later or share with your friends.

Cookies here serve to keep track of your cart and other configurations: language, currency, etc. This information remains confidential.